A community garden for cultural understanding and access to fresh produce

The community garden hopes to Provide Pelican Rapids residents without land access to a garden plot. They want to improve residents’ access to nutritious food and create safe spaces for residents to bond with each other.

Over time, the volunteer organizers and individual gardeners learn about each other’s favorite foods and preferred gardening methods through unstructured conversations.  For example, one of the Hispanic gardeners lost tomatillos when they were tilled under one spring by someone who did not recognize them.  Now the tiller avoids her plot each season.

A volunteer manager organizes the plots and tills the land. Gardeners work their plots on their own time.

Cecil provides the land and the water pump that allows access to river water. A local artist donated the garden sign when a friend asked her to. With support from the Food Shelf backing and energetic, enthusiastic volunteers, the garden does not need its own nonprofit status or many extra financial resources. 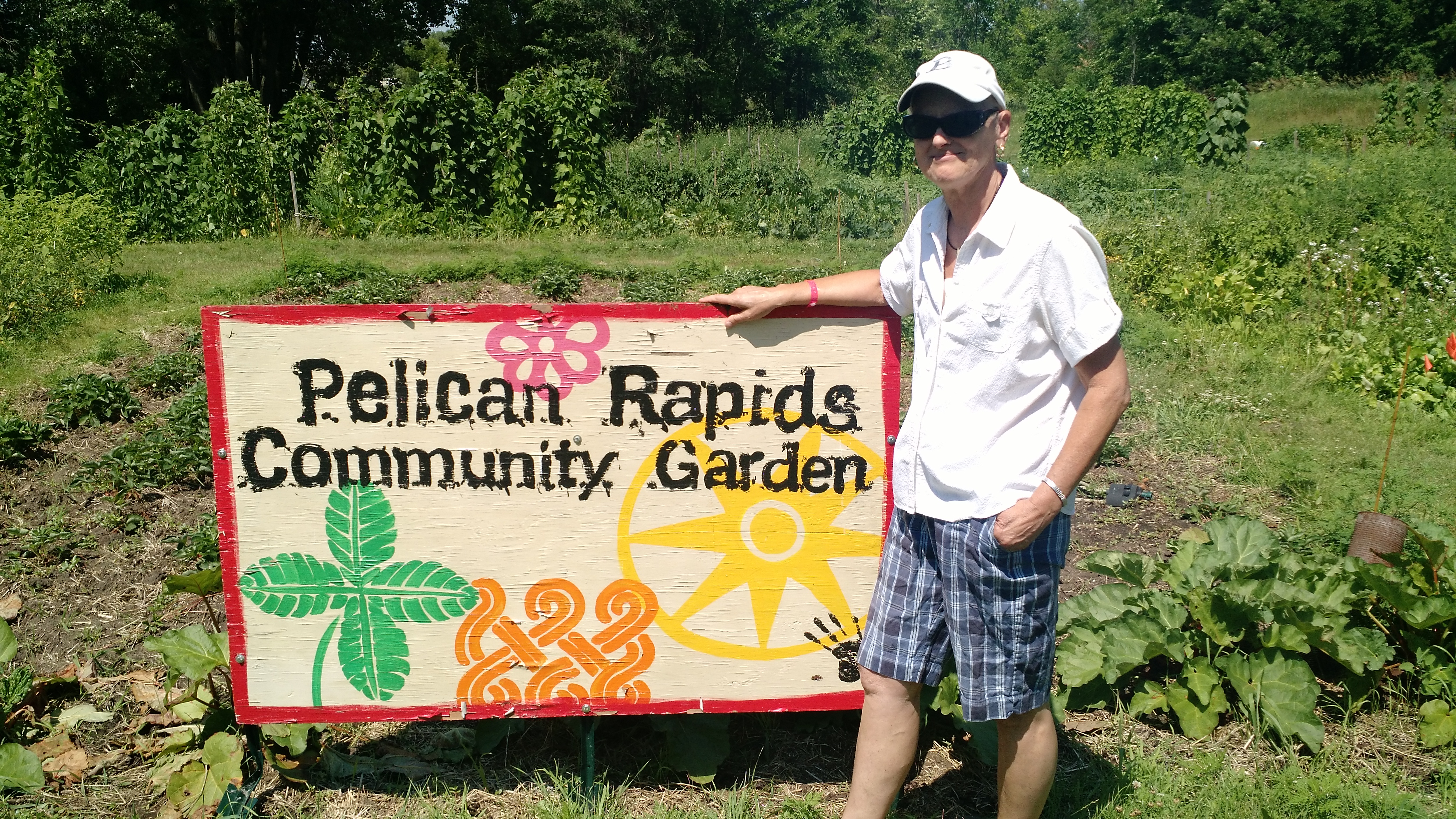 Our Story: It was never my land.

The Pelican Rapids Community Garden, started in 2000, offers 45 individual plots to local residents. It started when a local dietician, Janet Lindberg, asked a long-term Pelican Rapids resident, Cecil, if she could use his land to start a garden, for people she knew from work who lived in apartments. Cecil said yes, because he believes strongly in stewardship of land rather than ownership and domination over it. He explains his willingness to share his land by referencing his religious belief that “all flesh is grass,” noting that all life comes from and returns to the earth. And, he notes, he was not doing anything except mowing that part of his land, anyway.  He is happy to have it used productively.

I do not call it ‘my land’ because it does not belong to me; it never belonged to me. It was here before me, and it will still be here after I am gone.

Volunteers sustain the garden by doing necessary tasks, such as tilling and spreading manure once a year. Garden participants donate $7 per plot to the local food shelf, and the food shelf in turn pays the electricity bill for the garden’s water pump, which runs about $30 per month. Cecil owns the land, so he pays the property taxes. Gardeners share their tools and they provide their own seeds to grow. They received a $500 community garden grant from the University of Minnesota Extension Service that they used to pay for upkeep of the garden and its equipment. The gardeners often donate extra vegetables to the food shelf. Bosnian refugees and Hispanic residents make up a significant portion of the gardeners; about half of the gardeners are white, long-term Pelican Rapids’ residents. While gardeners grow their own vegetables on separate plots, the larger shared space creates opportunities for cultural understanding and interaction around gardening. While not targeted as a service for New Americans, the garden offers an opportunity to break down barriers between groups. The garden manager, local librarian Julie Tunheim, divides up and confirms plot assignments with gardeners, and ensures that the equipment runs smoothly. She owns the tiller, and pays for gas and upkeep herself. She also volunteers as the contact person for the program, makes sure that the gardeners follow the rules and are respectful of Cecil’s land.

This community garden provides people who would not otherwise have access to land a place to grow their own vegetables. It also provides some fresh produce to those who utilize the local food shelf. The opportunity to garden in a shared space reduces cultural barriers, because people have the opportunity to interact in a safe environment around a shared interest.

The main challenge comes from individual gardeners who do not follow the rules (keep your plot weeded and neat). Julie had to ask several individuals to leave their plots when they were not using them for their intended purpose. Upkeep occurs only as needed because there are very few resources to pay for extra efforts. The garden’s success depends on Cecil’s generosity and access to water from the nearby river. Without easy and inexpensive access to water and land, the garden would require much more money to continue operation.