Approximately 4 months (October 1992 to January 1993) to design the initial program’s year-round tutoring sessions held once a week (every Thursday).

Small grants were initially necessary to start-up the program. All tutors are volunteers. The local schools provide a space to meet and allow the use of the schools’ library and computers.

Our Story: "One needs to resist taking on the role of “helper” or missionary."

Immigrant parents who join West Liberty Adult and Family Tutoring (WLAFT) improve their English literacy and learn more about their children’s school life. West Liberty is home to a large meat packing plant, which offered employment opportunities that attracted a large immigrant population, initially including many Mexicans, followed by Vietnamese and Laotians. As immigrants came to West Liberty for employment, Ganas, a community based group, came together to support them transition to their new home town. Ganas member discussions early on often focused on a perception that Mexican immigrant parents were not participating in school activities. Carolyn Colvin, a professor at University of Iowa, started WLAFT, as she and several others came to realize that Mexican parents attendance at school events often went unnoticed, due in part to language barriers. WLAFT intended to counter the myth of uncaring, uninvolved immigrant parents by supporting them in their efforts to learn English and gain their own voice. During twenty-plus years of tutoring by undergraduate and graduate University of Iowa students, WLAFT continues to evolve and innovate in order to make the program better serve participants.

Teach grammar to me first and then I will decide whether it is important.

WLAFT seeks feedback from participants in order to help build a better curriculum, based on families’ needs. For example, WLAFT tutors initially downplayed formal grammar study, telling adult students that it was not important to learn grammar right away.  One participant said “teach grammar to me first and then I will decide whether it is important,” sparking a novel way to view curriculum development as a collaborative project. Colvin came to understand that the only way to effectively tutor someone was to ask them what they wanted to learn. Doing so builds a better bond between the volunteers and the participants, and helped create a program that is successful after two decades. Another example of collaboration explains WLAFT’s expansion into youth tutoring. In order to encourage more women to participate, WLAFT opened its doors to children. During the first five years of the program, the children’s program operated as a child-care center, but it later transformed into a tutoring area for kids.  By welcoming children, WLAFT better meets the needs of parents who work long hours.     Colvin remains driven to combat stereotypes about immigrant parents’ alleged lack of interest in their children’s academic life. Even after 20 years, she continues to meet people who do not understand her vision. Some educators push back on the program, and some participants ask her “why are you here?” She advises that running a program like this requires one to constantly question one’s own motives. She insists that one needs to resist taking on the role of “helper” or missionary, and instead ask questions about what people want and need through ongoing evaluation and assessment. WLAFT now finds children of original youth students coming into the program. The program’s impact depends on relationships built over years.

Creating a tutoring program in West Liberty allowed immigrant parents an opportunity to be part of their children’s academic life. This tutoring program promotes innovative and creative thinking that gives the adults the opportunity to shape the tutoring curriculum as they see fit. Giving the adult students authority over what is to be done in each session motivates them. This way, the program challenges on-going stereotypes about immigrant parents and their lack of interest in their child’s education. This program also helped create a childcare program, that also teaches young children basic skills in the classroom. The reliable nature of the program gives parents continuity and helps bridge gaps between schools and newcomers, beyond those grounded in language barriers. The university students who volunteer tutor gain valuable practice in their development as elementary education teachers.

When the program started, professors and school professionals did not think it’s plan of collaborative curriculum development would work. Such disagreement made it hard to develop a program that benefited the immigrant population. Adults from the program also questioned volunteers’ intentions. The program would work even better if tutoring sessions could be offered more than once a week, but it is hard to coordinate and staff such an effort. 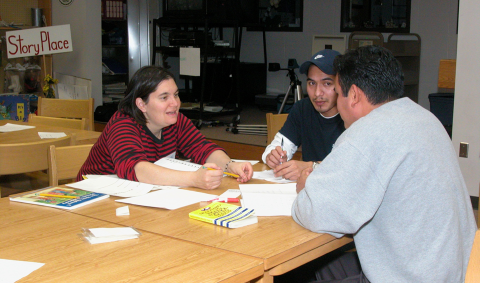